The song is about the lost spirit of a viking woman and a Volva trying to guide her back to the other side. 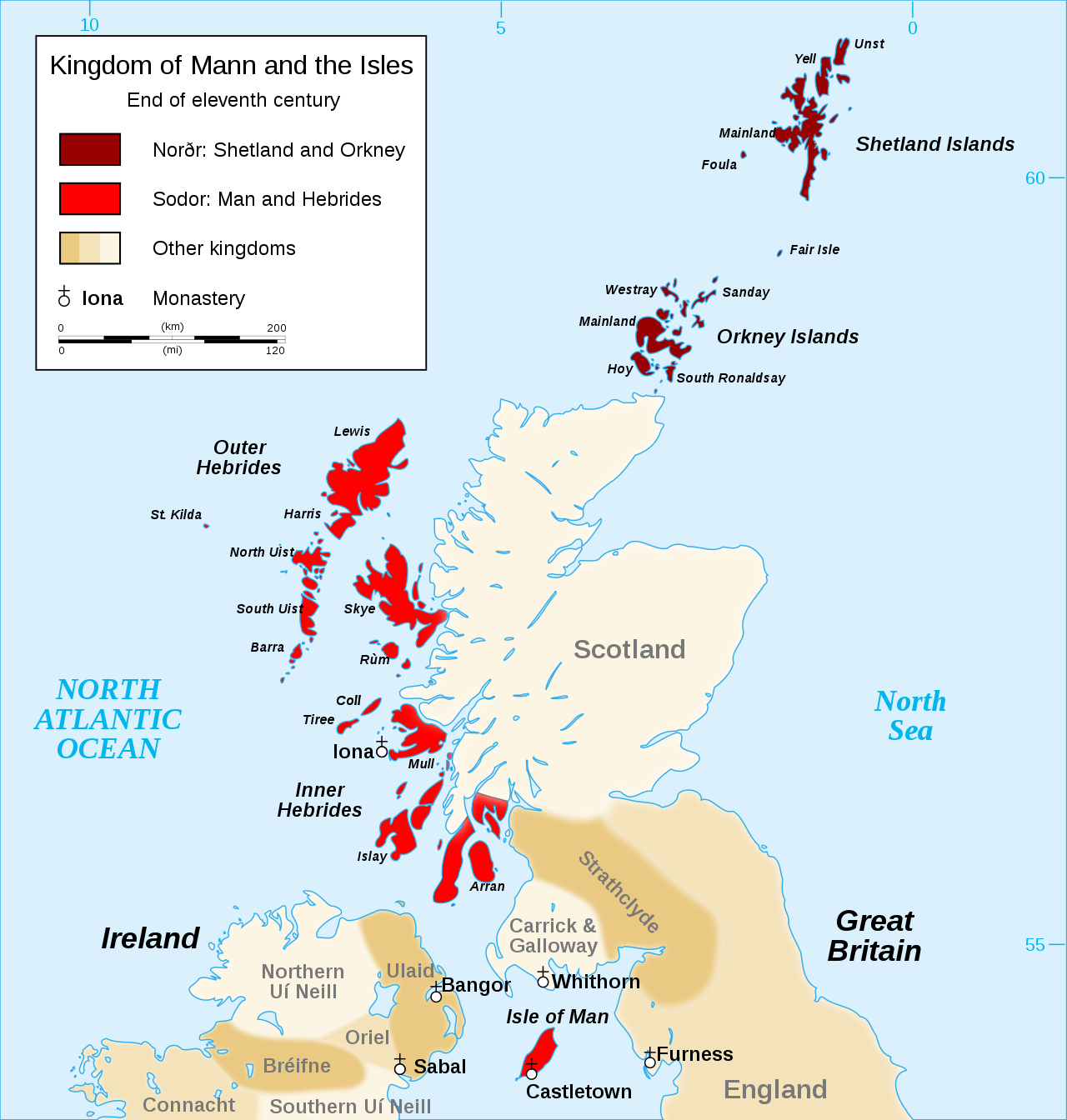 Scandinavian Scotland refers to the period from the 8th to the 15th centuries during which Vikings and Norse settlers, mainly Norwegians and to a lesser extent other Scandinavians, and their descendents colonised parts of what is now the periphery of modern Scotland. Viking influence in the area commenced in the late 8th century, and hostility between the Scandinavian Earls of Orkney and the emerging thalassocracy of the Kingdom of the Isles, the rulers of Ireland, Dál Riata and Alba, and intervention by the crown of Norway were recurring themes.
Scandinavian-held territories included the Northern Isles of Orkney and Shetland, the Hebrides, the islands of the Firth of Clyde and associated mainland territories including Caithness and Sutherland. The historical record from Scottish sources is weak, with the Irish annals and the later Norse sagas, of which the Orkneyinga Saga is the principal source of information, sometimes contradictory although modern archaeology is beginning to provide a broader picture of life during this period.
There are various competing theories that have addressed the early colonisation process although it is clear that the Northern Isles were the first to be conquered by Vikings and the last to be relinquished by the Norwegian crown. Thorfinn Sigurdsson's rule in the 11th century included expansion well into north mainland Scotland and this may have been the zenith of Scandinavian influence. The obliteration of pre-Norse names in the Hebrides and their replacement with Norse ones was almost total although the emergence of alliances with the native Gaelic speakers produced a powerful Norse-Gael culture that had wide influence in Argyll, Galloway and beyond.
Scottish influence increased from the 13th century on. In 1231, an unbroken line of Norse earls of Orkney ended and the title was since held by Scottish nobles. An ill-fated expedition by Haakon Haakonarson later in that century led to the relinquishing of the islands of the west to the Scottish Crown and in the mid-15th century Orkney and Shetland were also transferred to Scottish rule. The negative view of Viking activities held in popular imagination notwithstanding, Norse expansion may have been a factor in the emergence of the Gaelic kingdom of Alba, the forerunner of modern Scotland, and the trading, political, cultural and religious achievements of the later periods of Norse rule were significant.
Full article in Wikipedia

This Ancient Warfare Documentary shows the Vikings were remembered by their contemporaries as fierce, pagan raiders who threatened the Christian world. The Vikings were seafaring north Germanic people who raided, traded, explored, and settled in wide areas of Europe, Asia, and the North Atlantic islands from the late 8th to the mid-11th centuries.

The second part of this Ancient Warfare Documentary starts at 23:40 and focuses on Midsummer Day, 1314, the exiled Scottish king led an army against an English force three times as large. Pikemen in dense formation routed the English, restoring Scotland to the kingdoms of Europe. Warfare in Medieval Scotland includes all military activity in the modern borders of Scotland, or by forces originating in the region, between the departure of the Romans in the fifth century and the adoption of the innovations of the Renaissance in the early sixteenth century. 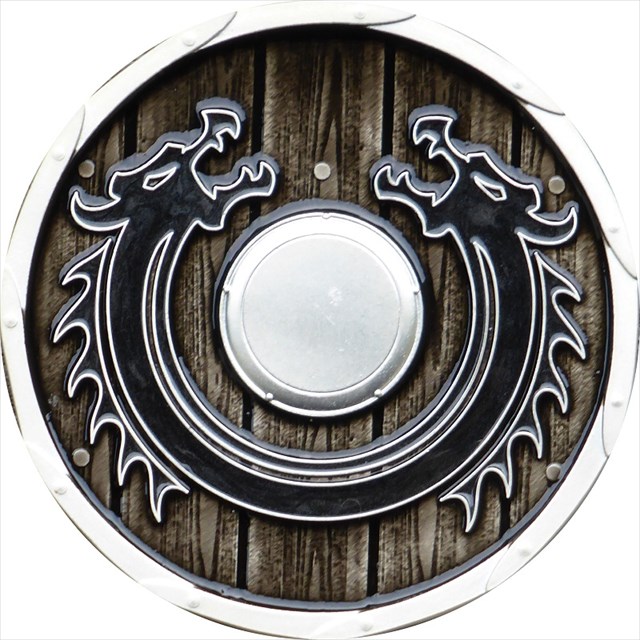 
The design on the front is based upon a replica of a Viking shield. The 3D detailing really stands out.

The wood grain texture combined with metal edges and nails holding it all together are all quite impressive. On the back, a verse from the Hávamál, part of the Edda, which is a collection of Old Norse poems from the Viking age. 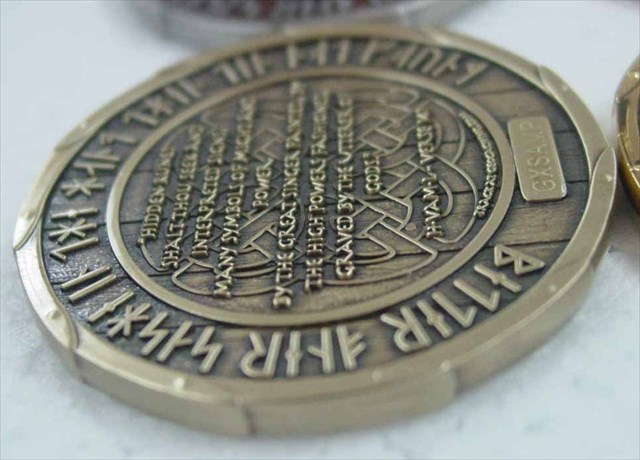 The Viking Dragon Shield Geocoin series is based upon the Viking mythology.
Skidbladnir (Skíðblaðnir, old Norse "assembled from thin pieces of wood") is the best of ships in Norse mythology. A sultry haze hangs in the air

A lightning storm cuts through the sky

Thunder, the master, calling for the clouds

Thunder, your master, summons you to this place

The sun rises up

A castle of gold

Shines through the clouds

Out of their dreams

To the rainbow bridge


Shrouded from the pale cold night

In the east you'll see its blinding light

From Dusk to Dawn, in peace and serenity

The sun rises up

A castle of gold

Shines through the clouds

Out of their dreams

To the rainbow bridge 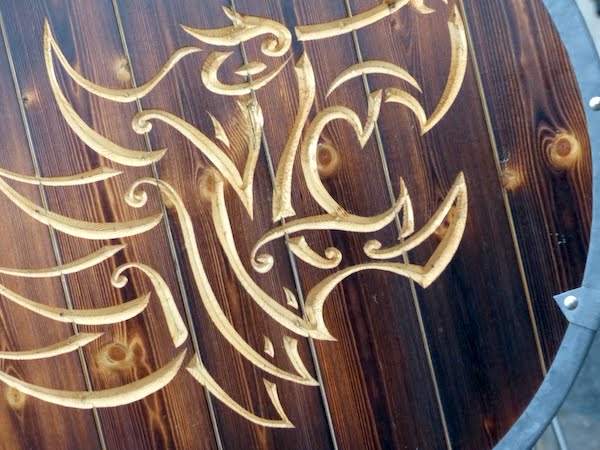 UP-HELLY-AA is a relatively modern festival. There is some evidence that people in rural Shetland celebrated the 24th day after Christmas as "Antonsmas" or "Up Helly Night", but there is no evidence that their cousins in Lerwick did the same. The emergence of Yuletide and New Year festivities in the town seems to post-date the Napoleonic Wars, when soldiers and sailors came home with rowdy habits and a taste for firearms.
On old Christmas eve in 1824 a visiting Methodist missionary wrote in his diary that "the whole town was in an uproar: from twelve o clock last night until late this night blowing of horns, beating of drums, tinkling of old tin kettles, firing of guns, shouting, bawling, fiddling, fifeing, drinking, fighting. This was the state of the town all the night – the street was as thronged with people as any fair I ever saw in England."
Album with 8 multiple-photos on Flickr 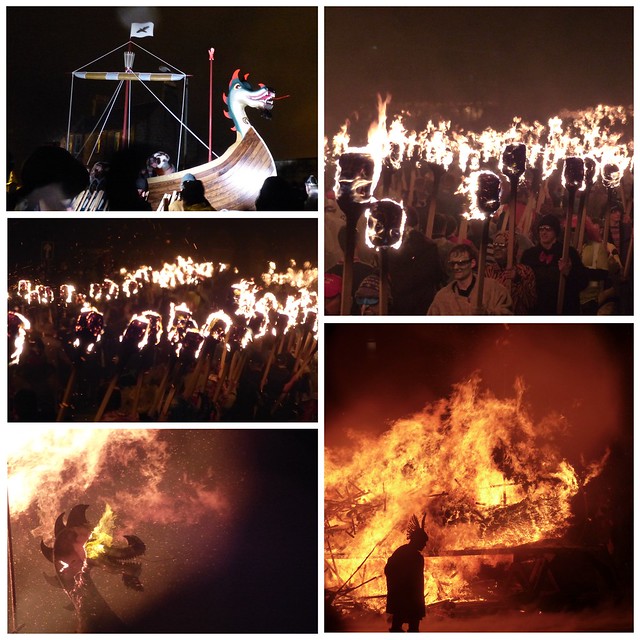 - Up Helly Aa is a tradition that originated in the 1880s.

- The Guizer Jarl is the Chief Guizer, the leader of the Jarl Squad who are the Vikings for the day.

- The first Up Helly Aa leader was elected by his fellow guizers away back in 1882 and was given the title of Worthy Chief Guizer.

- The Jarl Squad consists of the Guizer Jarls squad who are the same group of men that normally participate in the festival amongst the other 45 squads.

- The contents of the ‘Bill’ Are produced in secret by a committee, the lettering being hand painted on the board the day before and finally the Jarl gives his seal of approval by signing the ‘Bill’ that same evening.
- The Junior Guizer Jarl and his squad march along their procession route to burn the ‘peerie’ galley

- The 900+ senior torches will be lit. The Jarl Squad will lead the procession with the Jarl at the helm of his Galley. The procession will march along the prescribed route before finishing in the burning site at the King George V playing field.

- The first Galley appeared in the Up-Helly-Aa procession in 1889.